Zebrafish: Swimming into Popularity for Researchers 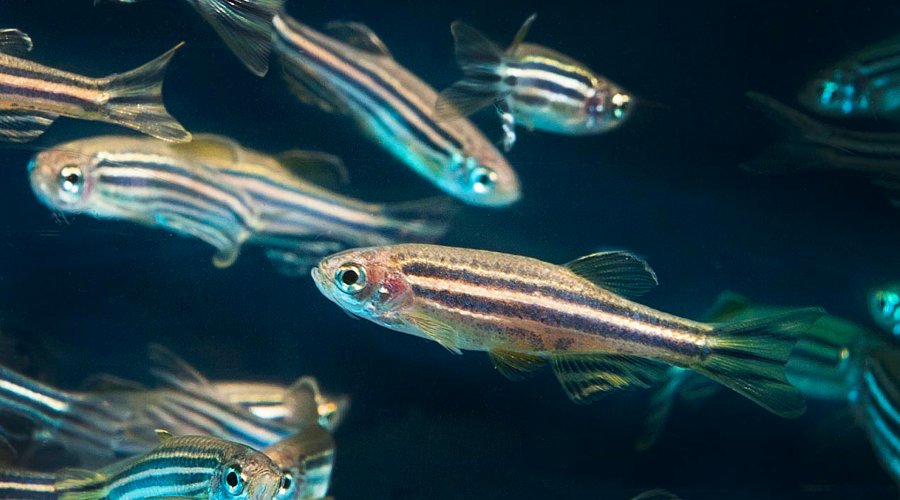 The zebrafish (Danio rerio) is a small fish that has been making big waves as a popular vertebrate model for research. Zebrafish are a species of tropical fresh-water fish, that are native to southeast Asia specifically India, Nepal, Bhutan, Pakistan, Bangladesh, and Myanmar. Zebrafish live in schools and range from about 1 inch to 1.5 inches long. The name “zebrafish” comes from the blue stripes on both sides of their bodies and because of this, zebrafish were found in pet stores around the U.S long before they were used for research.

Zebrafish use in research began in the 1970s when George Streisinger at the University of Oregon began using zebrafish as a biological model. He started using zebrafish because it is a physiologically simpler model system then mice and easier to manipulate genetically. Zebrafish took the next step in becoming the important model they are today in the 1990s when Nobel Prize winner Christiane Nusslein-Volhard in Tübingen, Germany along with Wolfgang Driever and Mark Fishman in Boston published papers on two large screens for zebrafish mutants that described about 1500 mutations in more than 400 genes involved in a wide range of processes. Sequencing of the complete zebrafish genome began in 2001 and was completed in 2013. A paper describing the results, “The zebrafish reference genome sequence and its relationship to the human genome,” was published in Nature.

Today zebrafish are used as a vertebrate model for genetic studies in many types of research including drug discovery and development, environmental, and medical research. They have been used as a successfully model in oncology, replicating human melanoma, specifically a single amino acid change in the gene BRAF, which is the most commonly identified mutation in human melanomas. Zebrafish have also served as a model system for genetic diseases such as Duchenne muscular dystrophy, where a knock-out of the dystrophin gene in zebrafish has been shown to closely resemble the severity and progression of the disease in humans. Because zebrafish generate large numbers of embryos each time they breed, they also serve as an ideal model for high throughput screening. This is particularly helpful for researchers looking to identify and test new drug compounds in the earliest stages of discovery.

But why are Zebrafish so popular?

One of the reasons that zebrafish are a popular vertebrate model is because zebrafish have many of the same major organs and tissues as humans. Their muscle, blood, kidneys, and eyes share most features with their human counterparts. In addition, approximately 70% of zebrafish genes are present in humans, as well as all 48 nuclear receptors. More than 80% of genes known to be associated with human disease have a zebrafish counterpart.

Unlike mammal models, which are more closely related to humans, adult zebrafish can produce hundreds of eggs at a time and breed approximately every 10 days. For comparison, mice, one of the more common orthologs, generally produce up to 10 litters per year of six to eight babies. Zebrafish lay and fertilize their eggs externally, allowing researchers to fertilize them in vitro and manipulate the embryo at all stages of development to create knockdowns or cause over expression of specific genes.

Zebrafish embryos and larvae are also clear as they develop, enabling researchers to watch the zebrafish develop and obtain real-time imaging based on those genetic modifications. Zebrafish grow at an extremely fast rate, so researchers can scale experiments that require gene knockout or overexpression more quickly and with faster results.

Another significant advantage of zebrafish is that zebrafish require much less space than mice and other mammals. The embryos are small enough to perform high throughput screening in 96- and 384-well plates. Zebrafish larvae can survive in very small containers and adult zebrafish prefer to be kept in large groups or schools, rather than needing to be kept in separate individual enclosures during testing. This combination cuts down on the cost of keeping and maintaining zebrafish for research compared to other common ortholog models.

Zebrafish also make compound delivery easier for researchers since like most fish, zebrafish can absorb dissolved substances through their skin from the water they live in. Since most compounds can easily penetrate the skin of the zebrafish, drug and toxicological screenings are able to be performed simply by adding these test compounds to the fishes’ water. Also due to their size, very low quantities of expensive test compounds and reagents are needed for studies.

While zebrafish are instrumental in a variety of research areas and present an attractive animal model for determining IC50/EC50 values and whether an off-target effect occurs, whole model testing is unable to provide information on which specific receptors caused off-target effect. This limitation is one of the reasons why INDIGO has developed its line of cell-based zebrafish ortholog receptor kits. INDIGO’s assays allow researchers to definitively determine which specific receptors are affected by a compound, a key piece of information necessary to continue in drug discovery.

Looking to learn more about an off-target effect from an animal model study? Request information from the team at INDIGO Biosciences and learn more about INDIGOs suite of assays and research solutions.